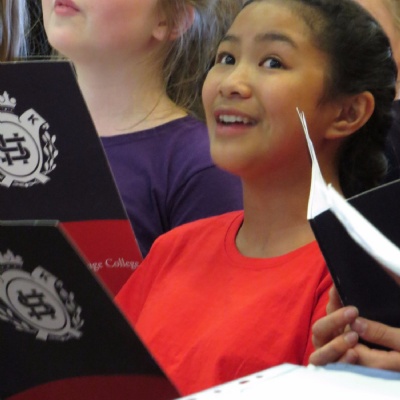 In the penultimate week of term, the music department held their annual summer concert. The theme of the concert was music from film and television.  This included wonderfully diverse styles of music in the form of the three choirs, the orchestra, Irish music group, Samba band, R’n’B Band, staff choir and Amy Kennedy (singer/songwriter) making her debut appearance.  The concert began with an uplifting performance of “Supercalifragilisticexpialidocious”, followed by “The Bare Necessities” and “Can You Feel the Love Tonight” from the orchestra and concert choir. The chamber choir followed with a subtle performance of “How Far I’ll Go” and “Heaven”, then the Irish Music Group had the audience tapping their feet again with a rendition of “John Ryan’s Polka”. The harmonious Gospel choir then performed “Seasons of Love “and “A Thousand Years” before the Samba Group had the school hall bouncing again before the Staff Choir entertained the audience and pupils alike with “Fields of Gold”. You could hear a pin drop in the hall when Amy Kennedy beautifully sang two of her own compositions. The musical celebrations were continued by the R’n’B Band performing “Let It Go” and “If I Ain’t Got You”. To end the evening the school orchestra and choirs performed “Skyfall” to rapturous applause.

Congratulations to all of our incredibly talented students (past and present) for making the evening such a success.