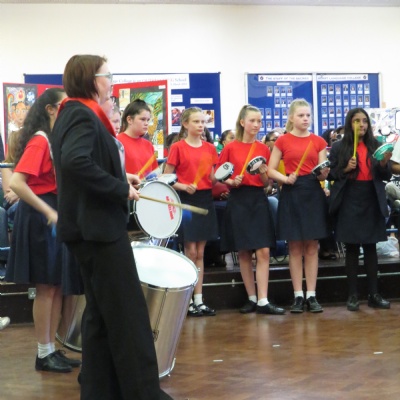 In the penultimate week of term, the Music department held their annual summer concert. The evening’s entertainment included wonderfully diverse styles of music in the form of three different choirs, the orchestra, the wind band, Irish music group, Samba band, R’n’B Band, Staff choir and the Year 8 Ukulele group making their debut performance.  The concert began with a stirring performance of “Somewhere Only We Know” and “Just Give Me A Reason” by the Concert Choir and band, followed by a subtle and moving performance of “All of Me” & “Seven Years” from the Chamber Choir. The Samba group had the audience feeling up-beat again before the harmonious singing of the Gospel Choir in their renditions of “Hold Back the River”, “Hold Your Hand” & “Wonder”. The Irish Music group performed beautifully “Barndance, Air and Polka” a composition by one of own GCSE Music students, Niamh Moran, before the Staff Choir roused the audience and pupils alike with “It Don’t Mean A Thing” and “Stand By Me”. The musical celebrations were continued by the Year 8 Ukulele and vocal groups version of “Riptide”, the foot-tapping sounds of the R’n’B Band performing “Super Duper Love” and “Take Me to Church”. To end the evening the school orchestra and choirs performed “Mama Mia” and “Firework” to rapturous applause.