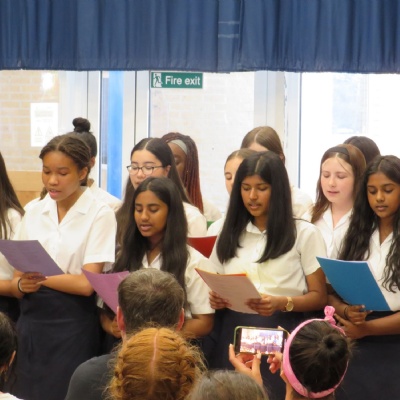 In the penultimate week of the summer term, the music department held their first summer concert for three years. The evening’s entertainment included wonderfully diverse styles of music in the form of the choirs, the orchestra, Irish music group, Samba group and the year 10 bands. The concert began with an uplifting orchestral performance of ‘Viva la Vida’ by Coldplay. After a soft and calm start to the Samba groups performance, the tempo and volume increased into an explosive Brazilian Carnival atmosphere! The concert choir followed with subtle performances of “A Thousand Years” and “All of Me”, then the Irish Music Group had the audience tapping their feet again with a rendition of “Sally Gally” & “Hares Paw Reel”. The harmonious chamber choir sang beautifully “A Million Dreams “and “Speechless” followed by the orchestra, continuing the theme of summer music, performing “Beauty & the Beast”. The musical celebrations were continued by the year 10 bands performing “Tears Dry on Their Own”, “Runnin’” and “Boys Don’t’ Cry”. To conclude the evening the school orchestra and choirs performed “Somewhere Only We Know” to rapturous applause.

An enormous thanks to the staff who helped make this event possible and congratulations to all of our incredibly talented and dedicated students for their hard work, truly making the evening a great success.