FEAST OF THE SACRED HEART CELEBRATIONS 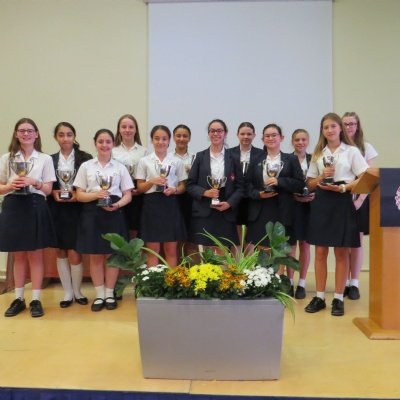 Traditionally, we celebrate our Feast Day of the Sacred Heart on the last Friday of June which this year coincided with the feast of St Peter and St Paul, a holy day of obligation on June 29th. We were fortunate that Bishop John Sherrington joined us to celebrate Mass. In his Homily, he spoke about St Peter and St Paul as missionaries spreading the Gospel in difficult circumstances, just as we are missionaries aiming to spread the Gospel in our communities, sometimes in difficult circumstances. He alluded to a meeting he had taken part in with the Metropolitan Police which identified the difficulties faced by families in London. He recognised the work of schools, particularly Catholic schools in forging strong communities which uphold the dignity of the person and spoke of our school developing ‘confident young women’ who will bear witness to Christ’s message of love to create strong communities.
After Mass and a short break, we gathered together to reflect on the year and show our appreciation of successes achieved in the Awards and Rewards Ceremony. Each subject nominates one pupil for Attainment and one for Achievement (positive Attitude to Learning) for which they receive a Certificate and a voucher; some pupils are nominated for several subjects in which case they are also presented with special awards, Trophies. Awards for 100% Attendance, which has a huge impact on success in school were presented. Two special awards: the Barbier Award, named after our Foundress, Euphrasie Barbier, acknowledges excellence in Learning; Chloe Coumbe was the delighted recipient this year. The Headteacher’s Award was presented to Natalie Botros in recognition of her contribution to the school community. During the ceremony representatives of each Year group made presentations on the opportunities provided to enhance education; trips, activities in Drama, Music, Sport and Art and supporting the Common Good by promoting awareness and fundraising for said causes. The range and success of individuals and groups was truly impressive and greeted by appreciation and enthusiasm; the Sacred Heart is a truly vibrant community of which we are proud.
We then enjoyed our ‘fun’ session. Traditionally, the school treats us to a BBQ which was, as always, well received whilst our school R&B band entertained us with exuberance. In recognition of the Football World Cup, the pupils played their own World Cup. After a series of ‘rounds’ during the previous week the final was played between Sweden and France with France winning 3 – 1. Not to be outdone, the Staff too, played a final between Germany and Brazil. With great enthusiasm and varying amount of skill, Brazil won the encounter. Finally, we all joined in and danced the ‘Macarena’ with again, varying degrees of ability but plenty of ‘joie de vivre’. It was a memorable and joyous occasion with a half day into the bargain.