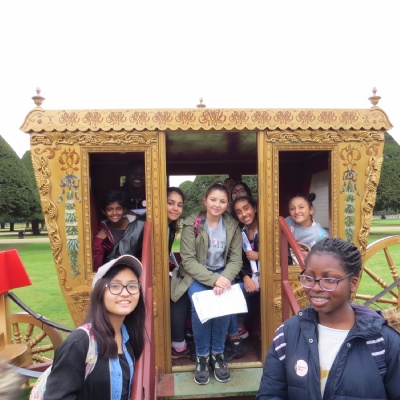 In November, the History Department took the whole of Year 8 on a trip to visit Hampton Court Palace to explore life in the court of Henry VIII. We all marvelled as we saw the sweeping drive which led up to the grand palace and felt that 500 years on, it was every bit as imposing as Henry VIII had intended. As we entered the palace we saw the replica wine fountain and imagined the elaborate parties that he held for his court. Every experience in the court, from the kitchens to the Great Hall was an example of Henry’s determination to show his wealth, generosity and power. We enjoyed exploring the beautiful Chapel Royal, the gardens and were interested to see how Henry spent his free time in his tennis courts and jousting arena. It was a very informative and enjoyable day out.

Our trip to Hampton Court gave us a great opportunity to explore more about the life of Henry VIII and his family. The palace looked so imposing when we first arrived. We could see the moat bridge which had many statues on it, each representing an aspect of the Tudor Royal family. We noticed that the palace was by the river, and understood how the river was essential for bringing guests and the huge amount of supplies to it.  We were amazed to hear that the kitchen served 1200 meals a day to the visitors and workers in the palace. The cooks ordered over 8,200 sheep, 2,330 deer and  1,870 pigs and  600,000 gallons of beer every year.  In Henry’s Great Hall we saw the 500 year old tapestries which, second only to the  crown jewels, are the most expensive possession in Britain today.  Year 8 had a brilliant time and would like to thank their teachers for organising such an interesting day out.