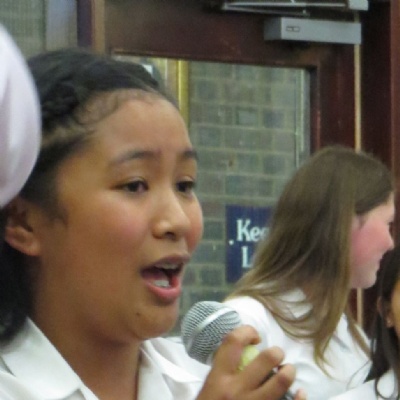 In the penultimate week of the summer term, the Music Department held their annual summer concert. The evening’s entertainment included wonderfully diverse styles of music in the form of the choirs, the orchestra, Irish music group, Samba group and the R’n’B Band. The concert began with an explosive performance of ‘This is the Greatest Show’ from the Greatest Showman by the Samba Group and Singers. The concert choir followed with subtle performances of “Love Story” and “Way Back Into Love”, then the Irish Music Group had the audience tapping their feet again with a rendition of “Out On The Ocean” & “The Rattlin’ Bog”. The harmonious Gospel choir sang beautifully “A Million Dreams “and “A Thousand Years” followed by the orchestra, continuing the theme of music from TV and Films, performing “SOS” from Mamma Mia. The musical celebrations were continued by the R’n’B Band performing “The Real Thing”, “Titanium” and “There’s Nothing Holding Me Back”. To conclude the evening the school orchestra and choirs, with soloist Jilliane Dela Cruz performed “This Is Me” to rapturous applause.