100th Anniversary of Women in Britain Getting the Right to Vote 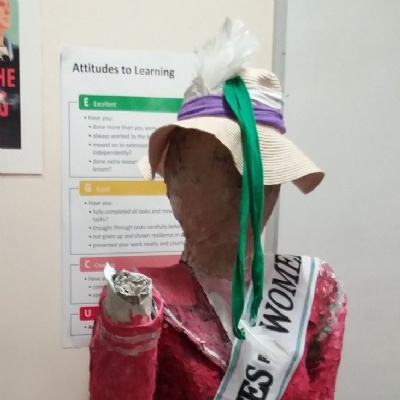 On 6th February 2018, it will be the one hundred year anniversary of women over 30 being given the right to vote in Britain.

To celebrate this wonderful moment in history, our Year 9 pupils have been learning about the work of the suffragettes and the hurdles they faced in getting the vote. They have produced a wonderful variety of paintings, dolls and sashes to commemorate the work of Emmeline Pankhurst and her WSPU as shown here, including a life size model made by Aurelia Cesar-Ojok in 9H. Well done girls!

Women’s Fight for the Vote

In Victorian society women were expected to live up to an image of 'the perfect being.' This meant being beautiful, shy, loving and intelligent. They were not viewed as people, rather objects and were very much inferior to men meaning they had no right to vote. Firstly a peaceful campaign led by Millicent Fawcett (NUWSS) was set up; it included no elements of violence or trouble to prove to men that women were well able to take on the responsibility of the vote.

However, Emmeline Pankhurst, founder of the WSPU, believed peaceful action was going to get women nowhere and preached it was 'deeds not words' that would get them the vote. The WSPU used many outrageous methods to raise awareness on the matter including: stone throwing at shops, slashing valuable paintings such as 'Venus', digging up golf courses and cutting telephone wires. A suffragette even sacrificed her life for the vote; Emily Wilding Davison was trampled on by King George V's horse in 1913 at the Epsom Derby when she walked onto the track during the race. Arresting, force feeding and mocking these strong women did not stop them in their tracks as after endless pain and suffering finally, in 1918 women over 30 were granted the vote. Then later in 1928 women were granted equal voting rights to men.

Since 1832, when the first petition for women to have equal rights was presented to Parliament, the fight for equality has remained an important part in the history of women. From 1918, when the first Act giving some women the right to vote was passed, until 1969 when this was extended to all women over the age of 18, women have constantly fought an ongoing battle to be equal. As a result of women such as Emmeline Pankhurst and Emily Wilding Davison, opportunities and positions which were once only available for men are now open to women too. In 1975, Margret Thatcher became Britain’s Conservative Party leader and in 1979 progressed to be the first female Prime Minister; a position held now by Theresa May. Today, university degrees and positions of responsibility are offered equally to men and women; statistics show that over 55% of female university undergraduates study medicine and over 65% law – a far cry from the day when these places were only available to men. The voices that fought for women’s rights 100 years ago have now given us the freedom of choice and the ability to lead. Our foremothers placed us in very good stead and we will continue to build upon their legacy!